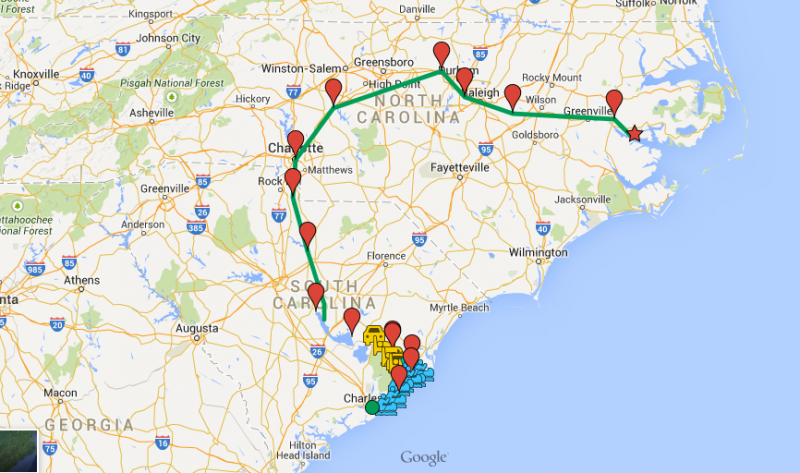 A century before Lewis and Clark, John Lawson made a journey...

Books on Broad will welcome non-fiction author Scott Huler to Camden as he retraces explorer John Lawson’s footsteps through the Carolinas, on Saturday, March 14, 2015, from 4:00 pm – 5:30 pm. Huler will talk about John Lawson’s journey and compare it with his modern-day journey and observations. Books on Broad is located at 944 Broad Street, Camden, S.C. 803-713-7323 M-S. The event is free and open to the public.

According to Huler’s website www.lawsontrek.com, in 1700, explorer John Lawson left “Charles-Town”, then the only settlement of any size in the Carolina colony, for a walk into the backcountry. Over the next months Lawson, with friends and native guides, made his way through the colony, mostly on foot. He kept a journal and produced a natural history of the colony; descriptions of the new territory’s plants, animals, birds, and crops; and a thorough account of the natives, including dictionaries.

Lawson’s resulting 1709 book, “A New Voyage to Carolina” was a bestseller, and his observations formed the foundation of understanding of the Carolinas. With the cooperation of modern scientists and historians, Huler is retracing Lawson’s journey to compare today’s flora, fauna, terrain, and inhabitants with those Lawson would have found more than 300 years ago.

The author of six books of non-fiction, Scott Huler has written for numerous newspapers and magazines including the New York Times and Fortune. His award-winning radio work has been heard on “All Things Considered” and “Day to Day” on NPR and on “Marketplace” and “Splendid Table” on American Public Media. He has taught at Berry College and UNC-Chapel Hill.

Books on Broad is an independent book store and coffee shop located in downtown historic Camden proudly serving SC roasted King Bean coffee and offering a broad selection of new, used, and collectible books. Books on Broad is open Monday through Friday 7:30 am – 6 pm, and Saturday 7:30 am – 4 pm. Shop from the website 24/7 at www.booksonbroad.com.